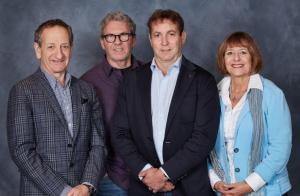 It was the entrepreneurial spirit of our late parents, Israel & Babs, that created ties with HUJI in 1968. Now, with Asper HUJI Innovate, the advancement of new ideas will continue for generations”
— Gail Asper – President, The Asper Foundation

TORONTO, ONTARIO, CANADA, January 12, 2021 /EINPresswire.com/ — The Canadian Friends of Hebrew University is pleased to announce a transformative gift of five million dollars ($5M) from The Asper Foundation , that will name Asper HUJI Innovate at the Hebrew University. This gift upholds a tradition of exceptional philanthropic support and collaboration between the Asper Family, based in Winnipeg, Manitoba and The Hebrew University of Jerusalem Israel (HUJI).

A portion of the funds will be used to establish an annual Asper Innovation Prize, valued at $35,000. USD. The prize will be awarded during a juried competition, intended to encourage, and recognize outstanding and promising student led startups. The public event will also be used to showcase the University as a central force for global innovation within the Jerusalem eco-system. (Jerusalem is currently ranked 6th In New Global Startup Ecosystem Report).

“It was the entrepreneurial spirit and wisdom of our late parents, Israel and Babs, that established ties with the Hebrew University close to sixty years ago. We are very proud of our long-standing partnership and connection to innovation that began with the creation of the Asper Center for Entrepreneurship in the Jerusalem School of Business Administration, in 2001. We are excited to witness, through Asper HUJI Innovate, new generations of students and academics lay the groundwork for advancing ideas, for generations to come." said Gail Asper, President, The Asper Foundation

The Asper HUJI Innovate platform encourages the entire university community, including students, faculty, and alumni and the Jerusalem community at large to develop their innovation and entrepreneurial capabilities.

Established in 2018, it was created as a platform to ensure that graduates are best prepared for the challenges brought about by disruption, inherent in an evolving workplace. Asper HUJI Innovate serves as a major boost to Jerusalem’s startup ecosystem.

Innovation has long been one of Israel’s most valuable resources. The Hebrew University of Jerusalem fuels Israel’s vibrant entrepreneurial culture, advancing research and technology by educating its vital, highly skilled, human workforce; one that produces more startups per capita than any other nation in the world.

About The Asper Foundation
Founded in 1983 in Winnipeg, Manitoba, Canada by Israel Asper, O.C., O.M., Q.C., L.L.D. (1932 – 2003) and Babs Asper (1933 – 2011) who believed that philanthropy is a driving force behind positive change in people’s quality of life. The Asper Foundation supports major initiatives in the areas of Jewish charity as well as culture, education, community development and human rights locally, nationally, and internationally.

About Hebrew University of Jerusalem Israel (HUJI)
The Hebrew University of Jerusalem was founded in 1918, Albert Einstein, Chaim Weizmann and Sigmund Freud were among its founders, and officially opened its doors in 1925. It is Israel’s premier university and research institution. It is the second-oldest university, established 30 years before the establishment of the State of Israel. It is ranked internationally among the 100 leading universities in the world with 6 campuses: 200 majors and programs and over 5,000 courses.

About Canadian Friends of Hebrew University (CFHU)
Founded in 1944 by Canadian philanthropist Allan Bronfman, CFHU provides support for The Hebrew University of Jerusalem to maintain its standing as one of the world’s leading academic research institutions, ranked number 3 in Asia and 70th globally – as well as aid in its continual pursuit to impact real change for its students, faculty, and the world at large. CFHU is headquartered in Toronto, with 6 chapters across Canada.