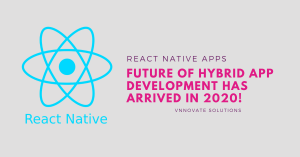 Most debated topics of the mobile industry was Flutter, React Native, Ionic, Xamarin or NativeScript? Check out What makes React native different from other?

AHMEDABAD, GUJARAT, INDIA, February 14, 2020 /EINPresswire.com/ — Mobile apps have changed the way we used our phones previously. With the growing use of smartphones with expanded its high-end processors, the mobile apps also have to perform well to make it worthwhile.

You may have probably noticed that most of the high performing apps with impressive designs and animations are downloaded the most, this means that if your app is not performing well and it serves poor user experience, you will be out of the race, your app will be uninstalled immediately. It does not just end up here, you can lose brand value and potential customers that affect your business.

One of the most debated topics of the current mobile industry was Flutter, React Native, Ionic, Xamarin or NativeScript? Check the insights in attached image!

Why React Native? What makes it different from other frameworks?

Moreover, you will find no traces of JavaScript after installing the app on cross devices. Building blocks used in the React native mobile apps are the same as are found in Android and iOS apps.
Here, the reasons for choosing to React Native:

Single Code Base
Saves cost and development effort by using the same code for the deployment of Android as well as iOS.

Live Reload
Enables you to review the results of the change in code as and when the app developers make them.

Intuitive and Modular Architecture
An easy interface to update with upgraded mobile and web applications sooner.

Open Source
Available for free. App developers can implement their libraries and use them in APIs without any operability issues.

2020 – Is this year of hybrid app development?
Maybe yes, or no – it depends upon business scope, time frame, and budget. Wrapping up the insights of the React Native app development framework, we would say that it can benefit about 80% of businesses by saving them a great deal of time and cost. React Native is a perfect solution for most cases unless you have some specific requirements and platform issues.