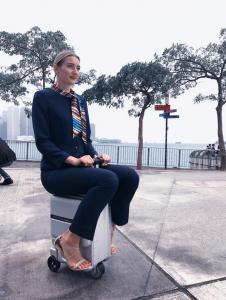 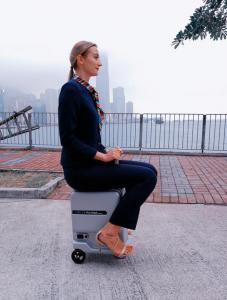 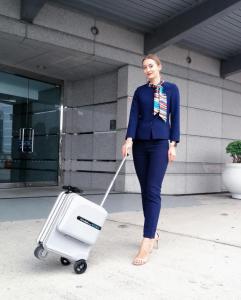 From the appearance, compared with the original SE3, SE3mini carry on luggage has a smaller cabinet size: 374x247x567mm, which can not only be boarded, no consignment, but also can be placed directly on the luggage rack of trains and airplanes, further enhancing storage. Convenience.

In terms of carrying, the SE3mini scooter luggage has two different carrying modes, such as riding and towing. It also has a handle on the side of the box. When facing the stairs, it can be carried directly by hand. The switch between the two modes of riding and towing can still be switched flexibly by simply pressing the telescopic function button.

The box wheel adopts a 3.5-inch tire and is designed with non-slip tread. It can be stably carried out even on a smooth indoor floor. The 350W power motor wheel can provide stable power output with a riding speed of 6km/h. The slope angle can reach 15°; the box material is still made of non-slip, scratch-resistant and waterproof PC+ABS. It is not easy to produce traces of bumps for a long time, and it is always new.

The side of the cabinet is designed with a running water lamp, which makes the night riding more conspicuous and beautiful, which can improve safety and enhance fashion. In addition, LED lighting is designed on the front of the box when riding, and it is instantly lit in a dark environment to ensure sufficient lighting.

Considering that the portable electronic devices on the road are not just one type, the SE3mini smart riding suitcase is equipped with two sets of high-speed USB charging ports, which can simultaneously charge electronic devices such as mobile phones and tablets.

With a battery capacity of 15,000 mAh, it provides longer battery life and provides more charging times for electronic devices.

The battery pack follows Airwheel detachable design. After disassembly, it can pass the security check, boarding, or charging separately. It can be replaced with multiple sets of battery packs, and the battery life can be improved.

Airwheel SE3Mini carry-on luggage is also an mobility scooter,You Can Take in it (on an Airplane)!